Method and precautions of cutting large seed tubers of potatoes

About 3 times more yield can be obtained by cutting large seed tubers of potatoes and sowing them. We can cut 1 big tuber into 3 pieces and sow it at 3 different places and we will get many plants from 1 tuber. But it is a risky task. They can become infected with the disease when the tubers are cut. If you are using large seed tubers, here are some important things to keep in mind when harvesting. 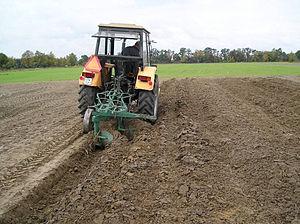